This journal describes my discoveries and the founding of the Seltani project — the “New Writers” of D’ni. To experience it for yourself, sign in and visit the Cavern! 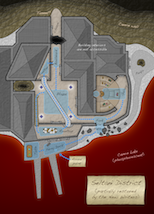 I drew this nice map of the restored section of the Seltani District. (Larger version.) I can’t promise to make similar maps of all the other Ages and Cavern regions, but I thought this one was important for orienting new visitors.

As promised: Salvanas, a puzzle Age.

One year ago today, I passed out the first Seltani linking booklets to members of the modern Guild of Writers.

Since then, we’ve had over 500 visitors, who have created nearly 200 new Ages. (Not all public, I admit.) I couldn’t be prouder.

I was hoping to commemorate the anniversary by opening up a new puzzle Age I’ve been working on. But it’s only about 75% done at this point -- sorry! I hope to finish it in the next few days. I’ll post a link when I do.

Thanks to everybody who has visited in the past year.

As you have noticed, my journalling dropped off radically after the Age Jam event.

The event itself went great. We got three entries... okay, two besides mine.

(Yes, those tags will link you directly to the Ages in question. Cool, eh?) Thanks to the participants!

However, for the new year, I have to announce my semi-retirement from the Cavern. It was great spending the summer and fall down here. But I have other projects to complete, and I can’t focus on Seltani this year.

I will keep the lights on, so to speak. I am proud of the progress I’ve made on Writing technology! It will not be lost. The District will remain open, and the Ages we’ve all built. And I’ll drop in every couple of weeks just to see if anybody’s added anything.

There’s more to do -- there’s always more to do. I regret that it’s been pushed to the back burner. If I see a growing crowd down here, maybe I’ll be able to justify returning to the work.

Thanks to everybody who’s heard the Call.

I’ve been working on the Seltani project for six months now — and it’s working out really well. To celebrate this, I am declaring an Age Jam! Stop by, build an Age, show it off. It doesn’t have to be a prize-winner. In fact there will be no prizes. This is an opportunity to try the tools and get some feedback.

I’m not going to get formal about the rules, but I do want to have some fun with it. Therefore, a schedule!

I will be around the Cavern as much as possible to answer questions during the two-week period. Hope to see you there.

Yes, I’ve been mostly absent from the Cavern for the past month. I apologize.

I can report one bit of progress: I finally wrote up the technique I used for Tenyo Gallery, the isomorphic semantic parallel structure. Now you can coordinate your Age with another Writer’s work — once the two of you agree on the details. For example, a mechanism in your world can influence a mechanism in your partner’s Age.

This is a crude imitation of Yeesha’s design for Relto, a customizable Age. She left inscribed pages around the various D’ni Ages which, when touched, alter the underlying natural features of Relto. My semantic parallel mechanism isn’t nearly that powerful; you can’t just drop bits of paper into any Age you like. (Much less into the surface world, as Yeesha did.) But two Writers can cooperate to produce a similar effect.

I’ve completed the isomorphism structure behind those runes that are scattered around Tenyo Rock. Meant to do that months ago... They’re linked to a new Age, a small gallery — you’ll find the linking book at the Tenyo arrival point.

Ever want to just tack a linking page to a bulletin board in the everyday world? Or stick one in an envelope and mail it to somebody?

Now you can. Here’s a link to Korvichtav, our current “Nexus” book collection. Try it; if you don’t already have Korvichtav in your linking booklet, it’ll automatically be added.

Even someone who’s never visited the Cavern can use these links. They’ll have to go through the usual registration process in an information booth, but once they do, the link will be waiting in their brand-new linking booklet.

I’ve been thinking about Age customization — ways for explorers to personalize their personal instances. I wrote up a quick example of this, the Age of Caelios. Linking books are in the usual locations.

The controls are modelled after Jalak Dador. That’s a classic D’ni Age whose mechanism is tied to a ki device; visitors can manipulate it with a handheld device. That seemed like a good idea, so I worked it into my linking booklet kernel.

When you visit your own Caelios instance, the back page of your booklet will show a list of touch controls. These are integrated directly into the Age’s descriptive grammar. Tap and the skies change! It took a lot of fiddling to make this consistent — I kept getting moonlight leaking out over the landscape when there wasn’t any moon. But I think it’s good now.

It’s been a blizzard of new linking books — way too many to keep in the Seltani gallery, any more. I cleaned most of them up and replaced them with a link to Korvichtav, a library Age created by Pavitra (thanks!) Korvichtav will be the primary link collection, until that overflows, I guess.

I’ve also posted a new Age of my own. Fleuven is another observation platform, but a moving one. Return to it periodically and you’ll see new scenery go by.

I’ve added a simple broadcast feature to the booklet. Enter “/shout Hello” on the message line, and it will pass the message to everybody in the same Age instance as you.

In theory this could also work between Ages. In fact I can send an administrator message to everybody whose booklet is active, in any Age — so I know it’s possible. Someday I’ll have buddy lists and all that social networking stuff... In the meantime, the register (where you sign in) will show recent visitors and their locations.

Six new Ages in the gallery this week! Thanks to Qalthos, Eyesack, Felix, Ryam, and 3Phen.

I’ve put out a linking book for Catalavir, my latest. (It’s been nearly done for a month; I finally got the last bug worked out.)

I also reorganized the books in the gallery, since there are getting to be a lot of them. They’re in three groups now.

Sorry about the long delay! I had to spend some time on non-Cavern concerns.

At the beginning of August I travelled to Rochester, and presented my Writing model to a group of Cavern explorers from the old DRC days. Exciting! Folks were very receptive; a crowd grabbed booklets immediately and headed downstairs to take a look. Several people were trying their hands at Age creation using my techniques. In fact, one guy had a working Age by the end of the day (thank you Qalthos!)

(I’m in the process of writing up an online version of the talk. For the moment, you can watch it on youtube.) (EDIT-ADD: The talk and slides are now up.)

I can also report a point of progress. I’ve finally gotten the recipe for constructing linking books hammered down into a reliable algorithm. (Apologies to everybody who was doing it the hard way.) So you can now build Ages that contain links to other Ages, the way Leafspin does.